In January, I was invited by our Congressman Mike Thompson to participate in an informal round table with some members of the House Ways and Means Subcommittee on Select Revenue Measures, which Mike Thompson chairs. I, along with representatives of the American League of Cyclists, the Rails to Trails Conservancy, the Great Redwood Trail project and an owner of a bicycle business in Congressman Thompson’s District had the opportunity to talk about examples where bikeways and trails are making a positive impact and represent a good investment of public funds. 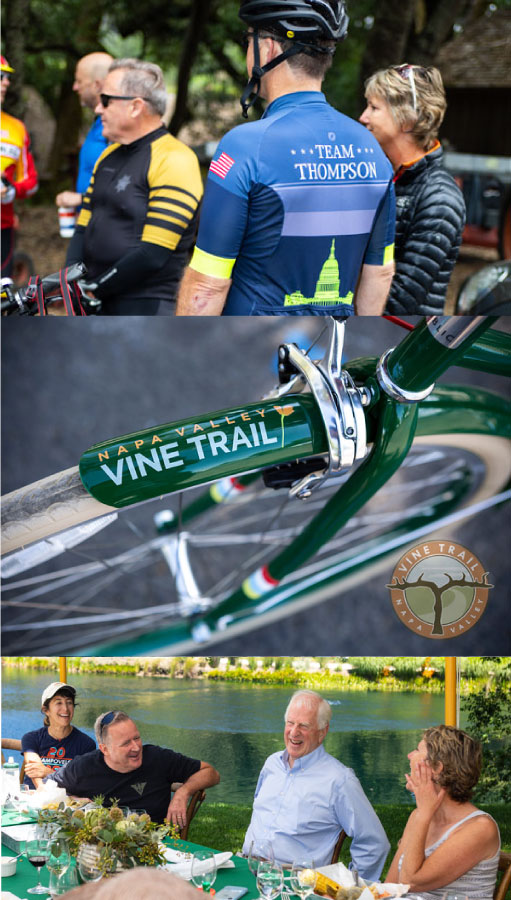 Congressman Mike Thompson is an avid cyclist and regular user of the VINE TRAIL. In the 1990s, when Mike was a State Senator, I had the opportunity of working with him on the development of the Joe Rodota and West County Trails in Sonoma County. At that time, I was lobbying to construct a section of the trail within Caltrans right of way on Highway 116 between Sebastopol and Graton. He and his local field representative, Jim Leddy (who coincidentally later served as the Executive Director of the then Napa County Transportation and Planning Agency in the mid-2000s) helped break the bureaucratic log jam. Mike has always been a dedicated supporter of bike trails and leads regular bike rides for his colleagues in DC.

The discussion at the round table centered on the growing demand for more bike and pedestrian infrastructure and in particular closing gaps in existing networks. It also talked about the economic and health benefits. By the end of the hour, it was clear that there are many examples of local collaborative processes, like the Vine Trail Coalition, helping to meet those demands.

As we emerge from the pandemic, the country faces a different future. Many of us have worked from home over the past year. Our home offices have reduced our need to commute. However, while road traffic shrunk in 2020, the VINE TRAIL and other bike paths have seen a substantial increase in use. Last year almost 523,000 uses of the VINE TRAIL were recorded on our three automatic bike and pedestrian counters, a 46% increase over 2019.

New bold initiatives such as the Great Redwood Trail, which would create a 316-mile biking and hiking path from Marin to Humboldt Bay, would do much to repurpose a railroad line that has fallen into disrepair and encourage tourism to support local economies. The House Ways and Means Committee can help spur trail development by creating incentives such as tax benefits to railroads for “railbanking”, where rights of way are not abandoned but transferred to a trail maintenance organization. However, the Committee can also be a powerful voice in promoting funding in any federal infrastructure legislation for bikeways and trails.

The Biden administration in DC has its work cut out on many fronts, but we are indeed fortunate to have a local champion in Congressman Mike Thompson.

VINE TRAIL Voted “Best of” by the North Bay Bohemian

VINE TRAIL Progress 2020: The Year in Review by the Numbers.

Inspiring a Community of Givers