GLIMPSES OF THE FUTURE 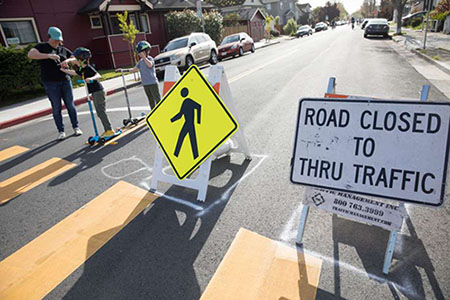 Over the past two months, have you noticed in your neighborhoods that people seem to walk and cycle more, stop and make conversation with you (with the appropriate social distancing-of course) and life has slowed down. Well, you are not alone. One of the consequences of the COVID-19 pandemic is that people are working and studying from home and not driving to and from work. With gyms and many parks closed, the use of the VINE TRAIL has skyrocketed.

During the month of April, use along the Napa Valley VINE TRAIL increased from an average of 31,208 in the previous three years to 52,842, a stunning 69% increase.

With tourism significantly down, almost all of these users were locals. Bike shops are reporting having difficulties catering to the demand for bicycles.

There is now a movement called “Slow Streets” which could turn some streets temporarily into bicycle and pedestrian only with the exception of local traffic. In April, New York announced that it would temporarily open 100 miles of roads to pedestrians and cyclists. Oakland plans to shut down about 10 percent of its streets to cars during the pandemic, while Seattle said it would permanently close 20 miles of roads. The Napa County Bicycle Coalition and other advocates for pedestrian friendly neighborhoods have formally requested that the City of Napa and other local municipalities adopt a “Slow Streets” program, which has been successfully implemented in nearly a dozen Bay Area communities with positive results.

In my lifetime there were two other crises when people stopped driving cars and walked or cycled to work or school but with different results.

The first crisis was during the Yom Kippur War in 1973 when Egypt invaded the Israeli occupied Sinai Peninsula. Saudi Arabia and other Arab oil exporters imposed an embargo on the US, Britain, Canada, Japan and the Netherlands for supporting Israel, and it quadrupled the price of oil.

The Netherlands used this period to reconsider its future.  You may be surprised to learn that between the end of World War Two and 1973, the Netherlands had seen a dramatic rise in car ownership and an equally dramatic drop in bicycle use. The decline was estimated to be 6% per year from the 1950s to the 1970s. The Dutch “bike culture”, which visitors now take for granted, simply did not exist. Historic areas of Amsterdam had been demolished in the 1950s and 1960s to make way for freeways and a road infrastructure to serve a burgeoning growth of private car ownership. After all, Royal Dutch Shell, one of the largest oil producers in the world, is as its name states, Dutch. In the early 1970s there had had been some protests because of an increase in automobile related deaths including children. The “Stop de Kindermoord” (Stop children’s murder) campaign, although passionate, was dismissed by many as the cost of a shiny “Autopian” future.

But then the 1973 oil crisis happened. During a television speech, prime minister Den Uyl urged Dutch citizens to adopt a new lifestyle and get serious about saving energy. The government proclaimed a series of car-free Sundays: intensely quiet weekend days when children played on deserted roadways and people were suddenly reminded of what life was like before the ascendancy of the automobile.

Although once the crisis abated as the cost of oil dropped and the streets mostly returned to the automobile, but the Dutch realized that maybe the automobile was not the mode of transportation of the future. By the 1980s most Dutch cities were heavily investing in bicycle infrastructure, which has now expanded to over 35,000 kilometers of protected cycleways.

The second crisis was in 1979 when the Iranian Revolution significantly cut oil production. Again, there were lines at gas stations which often erupted into violence. I was working for the City of Las Vegas and joined many of my fellow workers riding bikes to work, often down the semi deserted fabled Strip despite the 90-degree weather.  However, once the crisis had gone away and the Reagan era ushered in a new goal of “Energy Independence” the desire to create more bike friendly streets seemed to disappear.

During both of these crises, there was a glimpse of what life could be like in a world where the automobile presence was reduced in our cities. Although at the end of the crises, the automobile was back, there were important lessons learned. So, like the Dutch forty seven years ago did with car-free Sundays, the adoption of a “Slow Streets” program would provide residents with the experience of car free or car restricted areas.  Of course, once the pandemic subsides the “Slow Streets” program with temporary road closures will be under pressure from the automobile just as happened in previous crises.

Safe cycling and pedestrian trail facilities and infrastructure are not only needed in times of COVID-19,  they are needed to provide an alternative to local travel, car-based tourism and to enhance Napa Valley’s position as North America’s premier wine, food, arts and wellness destination. That is why we cannot “take our eyes off the prize” of developing the Napa Valley VINE TRAIL as a guaranteed car free way to link all the communities in Napa Valley and eventually expand to connect to a network of existing and planned bicycle and pedestrian friendly alternative routes to serve locals and visitors.

With your support we will achieve that goal. Together we can build a Napa Valley future that is safer, greener, healthier and more economically vital while connecting our residents and visitors like never before. We need your help more than ever to complete two pending projects the St Helena to Calistoga section and the American canyon the Vallejo section slated to begin construction in 2021 and 2022 respectively.

So, it is up to you. If you are one of the 52,842 users that enjoyed riding walking or running the Vine Trail in April as an alternative to your suspended monthly gym membership, consider becoming a member of the Napa Valley VINE TRAIL Coalition with a tax-deductible $47/year membership at the basic level or our Century Level at $147. There are benefits to your membership including discounts with our business

Electric Bikes: Should You Go For It?

VINE TRAIL Voted “Best of” by the North Bay Bohemian

VINE TRAIL Progress 2020: The Year in Review by the Numbers.

Inspiring a Community of Givers