Access to the VINE TRAIL will make your community more livable. 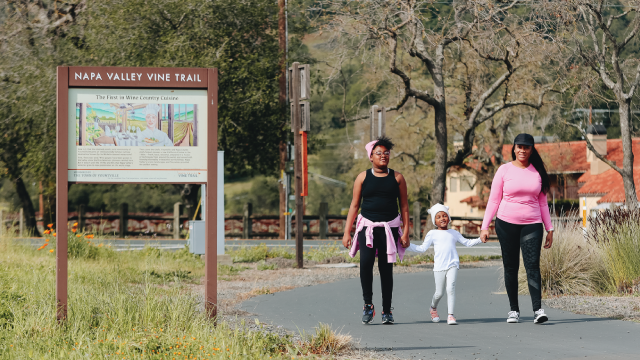 Active transportation networks provide more people—such as children, seniors, those with disabilities and those without economic means—with inclusivity and connection to not only destinations and opportunities, but their communities and society at large.

A study from the National Institute for Transportation and Communities shows that nearly three times as many residents say protected bike lanes increase the desirability of living in their neighborhood.

There was consistent evidence that the protected facilities improved the perception of safety for people on bicycles. Nearly every intercepted bicyclist (96%) and 79% of residents stated that the installation of the protected lane increased the safety of bicycling on the street. These strong perceptions of improved safety did not vary substantially between the cities studied, despite the different designs used.

The study found a measured increase in observed ridership on all surveyed facilities within one year of installation of the protected bike lanes, ranging from +21% to +171%. Some of the increase in ridership at each facility likely came from new riders (i.e. riders who, absent the protected bike lane, would have travelled via a different mode or would not have taken the trip) and some from riders diverted from other nearby streets (i.e. riders who were attracted to the route because of the facility, but would have chosen to ride a bicycle for that trip regardless).

Many Americans live in communities without any protected bike lanes or safe active transportation infrastructure. Shifting short car trips to walking and biking trips is achievable. Many of the trips Americans take are only 3 miles (a 20-minute bike ride) or less.

Shifting these short car trips to non-motorized ones, however, will take policy, behavior and perception change, which can only occur if connected networks of safe and protected walking and bicycling facilities are built all across the nation.

Are you a TRAILBLAZER? We're Hiring!

A Superb Collection of Wines

Meet Our Eyes On The Trail

MEGA Project The Future of The Napa Valley Vine Trail

How To Get More People To Use Active Transportation

An Investment in the VINE TRAIL